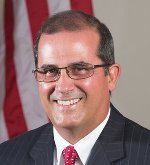 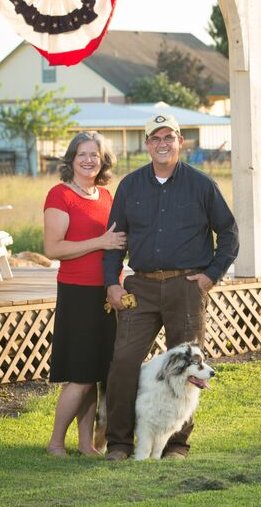 Tom with wife Debbie. They appear here with Rosie the dog at their acerage north of Inola.

Inola Republican Tom Gann and his wife have been married 44 years, Tom and Debbie are parents of three children with 8 grandchildren.

Tom was born in Wagoner and grew up in Tahlequah where he later graduated from NSU.

Tom and Debbie attend church in the Inola area and have been instrumental in forming and supporting Crisis Pregnancy Centers and promoted Abstinence Education.

A limited government conservative, Tom has a lifetime of experience as a small businessman.

In 1984, he started his first small business in Ft. Gibson selling gas and groceries to the local community. The business grew to 12 employees until being sold in 1996.

In addition to his own business, Tom developed other commercial properties which brought new restaurants and an auto repair business into the community.

Over the years, Tom has responded to the call to defend our values and principles.

He served 5 years on the Ft. Gibson School Board where he stood firm against a top down, socialist, federal takeover of public education known as Outcomes Based Education. He successfully brought an end to the pilot program which had forced the school district to participate in the federal effort.

This experience led Tom to challenge a Democrat politician for State Senate District 3. Tom won 41% of the vote even though Democrats outnumbered Republicans by a three to one ratio.

Tom has served as a Republican State Committeeman and as a past member of the Republican Party’s Platform Committee.

Debbie, who has a degree in Education, is a former Court Appointed Special Advocate (CASA) and served as a Keating administration appointee on the Oklahoma Abstinence Education Council.

INOLA - Oklahoma State Representative Tom Gann, House District 8, has announced his 2022 campaign for re-election. First elected in 2016, Gann became one of only two elected state representatives that do not take lobbyist or PAC money. Gann has remained true to his pledge and will continue to represent the 8th House District by principled voting. He also is one of only two who refused to take the 35% pay raise given to the legislature in 2019. He donates the difference to various charities and benefits in his district.

In 2018, Gann served on the House Special Investigative Committee where waste and mismanagement by the Oklahoma Department of Health was exposed. In 2019 Gann followed up on the findings of that committee by co-authoring Senate Bill 316 with Senator Nathan Dahm. This bill requires greater transparency of agencies with regards to state funds and relationships agencies form with each other. The bill was signed by Governor Stitt and became law November 1st, 2019.

As Chairman of the Administrative Rules Committee, Gann played a crucial role in improving oversight and efficiency within state government by hosting an interim study that resulted in the passage of SB913 by Senator Julie Daniels. This bill created the Joint Committee on Administrative Rules with the Senate increasing transparency and scrutiny over the process. This enhances the “Break the Tape” initiative that Governor Stitt started to reduce the impact of the regulatory code on businesses and taxpayers in Oklahoma. Recently, Gann has been very instrumental in seeking an end to the abusive vaccine mandates. He proposed a plan to end to the abuse with legislation that reaffirms a person’s right to say no to experimental vaccines and other unwanted medical mandates with the “Liberty Bill”.

“I would be honored to continue my service on behalf of the voters of the 8th House District. With your vote and support, I will continue to vote based on principles for limited government, individual liberty, life, and the values that reflect God wisdom and design.

Tom and Debbie Gann have been married for 44 years. They live on a small acreage in Inola, Oklahoma. Tom is retired from Tulsa International Airport where he was the Airport Auditor for 10 years. Tom and Debbie have 3 children and 8 grandchildren. The 8th House District covers Mayes, Rogers, and Wagoner Counties. 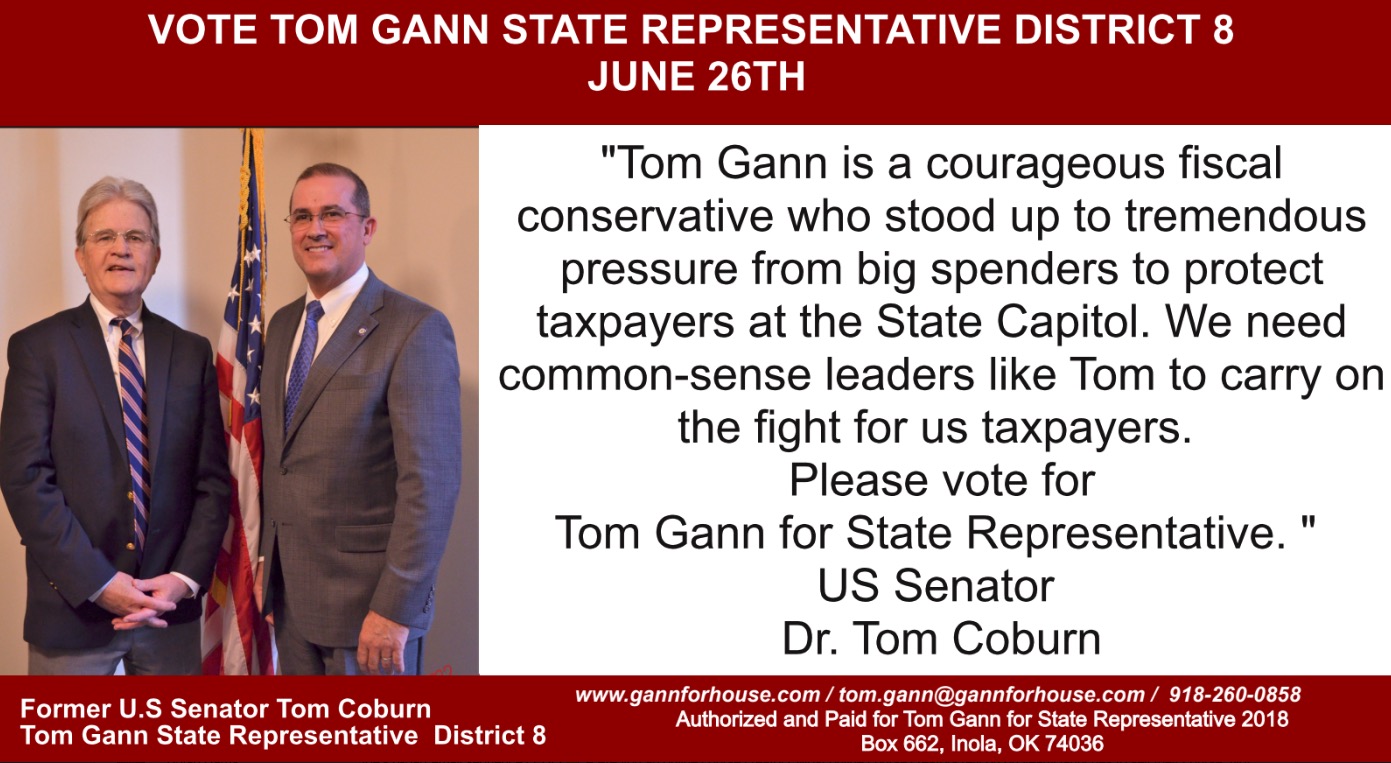 “I received numerous calls from concerned constituents who are being asked to take an experimental, emergency use authorization (EUA) drug as a condition of continued employment. The manufacturers of the EUA have been exempted from legal liability. While the Federal Drug Administration has approved a normal use authorization of the drug, it hasn't been made available; and there is little evidence that it will be made available at any point in the near future, because I believe the approved version of the drug would subject the drug makers to legal liability from injured Oklahomans.”

“Following Oklahoma's successful, landmark opioid settlement against the drug makers, it's inconceivable that any employer would ask employees to subject themselves to an EUA injection from that same industry,” Gann stated. 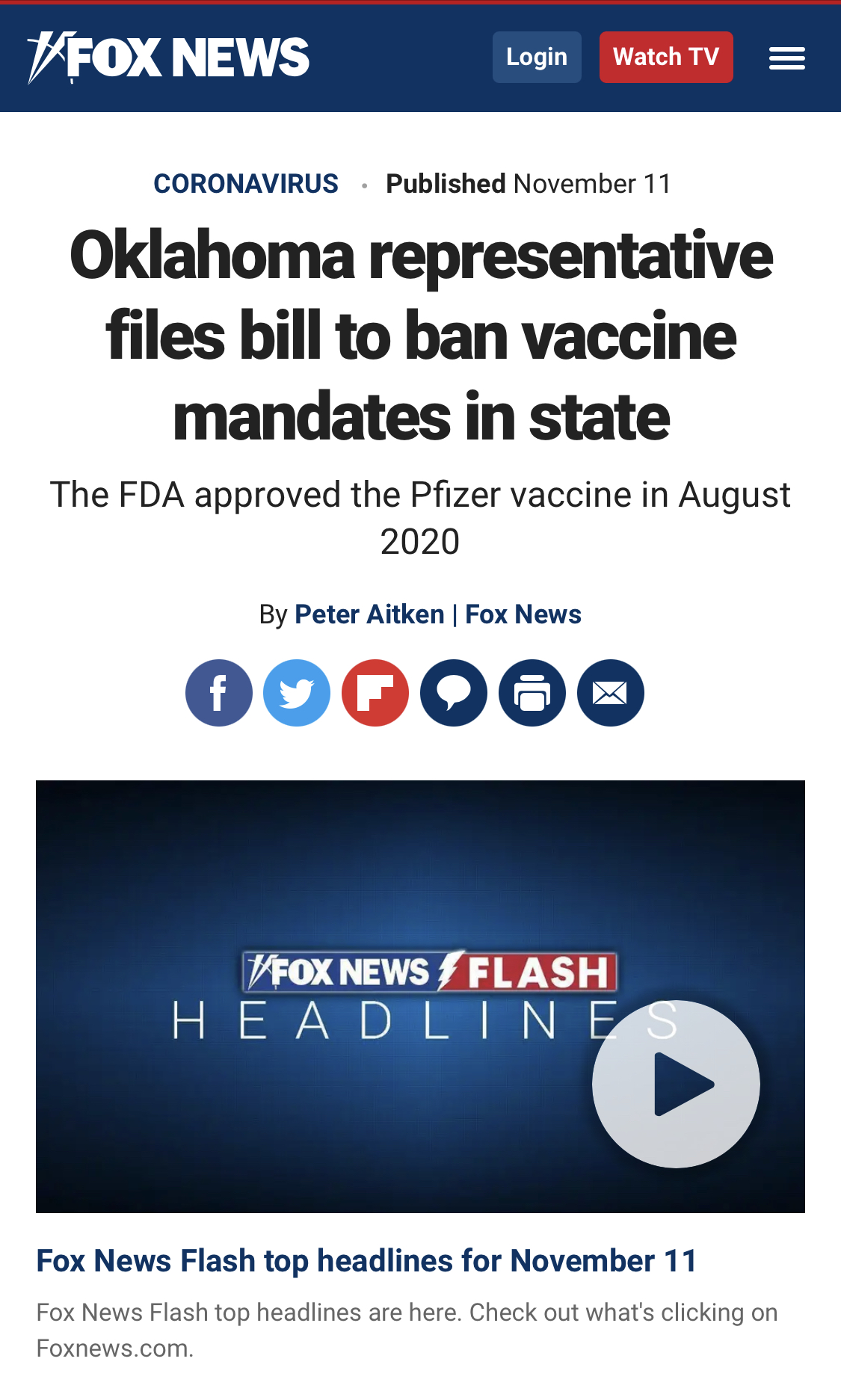 The bill will also be filed in the Constitutional regular session in February 2022.

HB1003 duplicates an Illinois law that has been on the books in that state since 1998.

Gann is unaware of any evidence of any harm to that state's employers during the time since the law was passed. The law prevents employers from discriminating against employees who resist forced drug injection.

HB1003 reads as follows: "It shall be unlawful for any public or private employer, entity, agency, institution, official or person, including but not limited to, a medical, nursing or other medical training institution, to deny admission because of, to place any reference in its application form concerning, to orally question about, to impose any burdens in terms or conditions of employment on, or to otherwise discriminate against, any applicant, in terms of employment, admission to or participation in any programs for which the applicant is eligible, or to discriminate in relation thereto, in any other manner, on account of the applicant's refusal to receive, obtain, accept, perform, counsel, suggest, recommend, refer, assist or participate in any way in any forms of health care services contrary to his or her conscience.""

Local control of public education is vital to education improvement. Our local schools should be governed by the communities in which they reside. Parents, teachers, and citizens should be allowed to directly control what is taught and how it is taught through their representatives on their local school boards. School Boards should remove their support from the National School Board Association that declared parents domestic terrorists for demanding transparency and accountability as to what is taught to their children.

Private corporations should not be allowed to dictate to local schools through partnering with governmental entities what should be taught or how it should be taught and tested. Large amounts of private dollars have been invested into “new” systems of education by private firms which stand to reap huge profits through tax dollars.

The teacher needs to be the authority in the classroom. Teachers need to be free to teach and not be forced to comply with regulations that limit the use of their training and expertise or require them to teach Marxist doctrine using race to divide students. Here are my ideas that would help restore public education back to its rightful place.

Rep. Gann with David Barton at the Signing of the Ten Commandments Bill.

OKLAHOMA CITY – State Rep. Tom Gann today attended the governor’s ceremonial bill signing of House Bill 2177, which will allow the display of the Ten Commandments in state buildings, public schools or on other public property alongside other historically significant founding documents such as the U.S. or Oklahoma Constitution, the Declaration of Independence, the Bill of Rights, the Magna Carta or others.

Gann was a co-author of the bill.

“Even just a cursory reading of our nation’s founding fathers reveals that they drew heavily upon the influence of the Ten Commandments when shaping our nation’s system of laws,” said Gann, R-Inola. “To allow the display of the Ten Commandments is not an endorsement of a particular religion favored by the state, but an accurate portrayal of an influence that helped shape the history of our great nation.”

Gann pointed out that the Ten Commandments are displayed in the U.S. Capitol, the National Archives, in the U.S. Supreme Court, in many state capitols and in scores of other Legislatures, courthouses and other public buildings across America.

As State Representative, Tom Gann has: 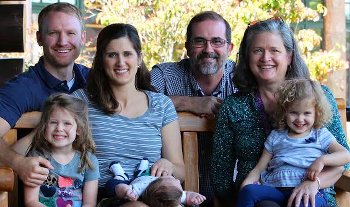 Tom believes that faith and freedom go hand in hand and we can’t have one without the other. He believes, as did our nation’s founders, that God is above all, cares about and is involved in the affairs of men.

"God who gave us life gave us liberty.”-President Thomas Jefferson

Tom supports a traditional view of marriage; a loving and life-long covenant between one man and one woman made before God. Government cannot redefine the institution of marriage and when it attempts to do so it places our nation's very foundation at jeopardy.

Children are a gift from God and as State Representative, Tom will aggressively defend the sanctity and dignity of human life.

Fought for a Smaller, Limited Government;

Tom believes in the Constitution. We are a nation of laws and not of men. He will lead the effort to return to a more limited state government. He will advocate states' rights; insist on a return to the Constitutional balance between federal and state government; oppose federal overreaches such as Obamacare; and stand in opposition to the federal government's attempts to regulate our local waterways and environment which could prove so costly to area residents. 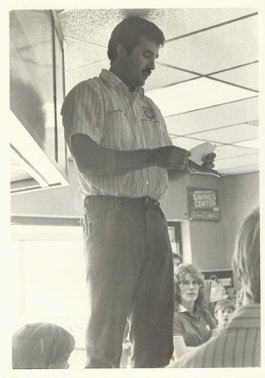 Tom addresses his employees and the public at the Fort Gibson store he opened in 1984. Gann's experience as a businessman will guide his tenure as State Representative.

Defended the Business Owners of Mayes, Rogers and Wagoner Counties;

As a small businessman, Tom knows that government does not create wealth, the people do. It is only when a person has the freedom to benefit and prosper through his or her own efforts that we realize the creativity and innovation to drive our economy to the benefit of all. Tom will oppose increased state government regulation and taxation of business and will work to repeal the antiquated laws which currently inhibit growth for area business owners.

Opposed Federal and State Takeovers of Education; and

As a school board member, Tom successfully put a stop to district participation in the federal government's Outcomes Based Education (OBE) program. As State Representative, he will continue to oppose federal intervention in education and will oppose Common Core and its various derivatives. Tom will advocate for local control and will oppose state mandates which tie the hands of local parents and teachers.

As a rural property owner, Tom knows first hand the importance of the 2nd amendment and our God-given right to self defense. He is a leading advocate for 2nd Amendment and other liberties granted by the Bill of Rights. 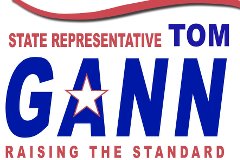 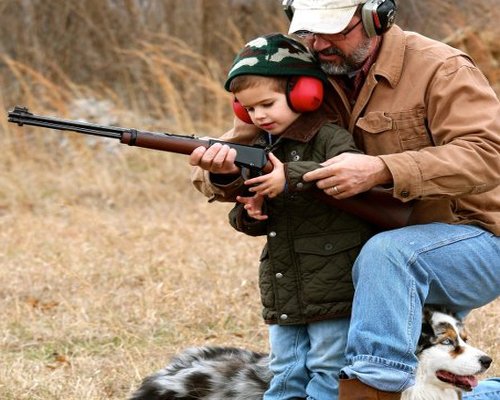 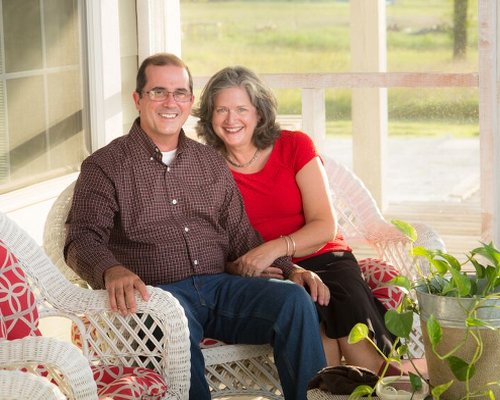 Tom and Debbie have been married for 44 years. 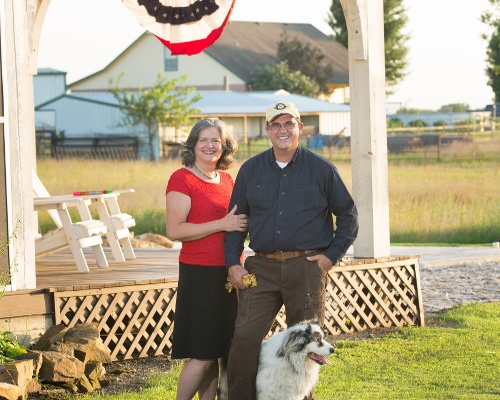 Tom and Debbie at the couple's acerage north of Inola.